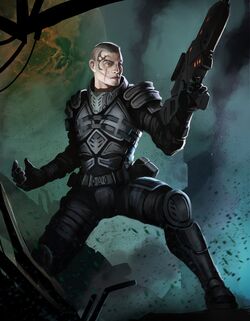 Pomolar Karr was a troublemaker from the very childhood. The hyperactive son of Meugo immigrants got expelled from school, because neurotherapy and soothing drugs didn't work on the unmanageabe boy. He however showed innate leadership skills, interest in military history, explosives and weapons. Unlike his friends, he wasn't accepted ho famous DaruDar military academ. Feeling spurned and unappreciated, he had to work as magrav cleaner and bouncer. Mykoisation of Meugo drasticaly changed his view on the society - many of his relatives died and he turned his anger towards the government. Together with his friends, among them Bark Monorok and Dax Vrilon, he founded radical oragisation Bai'ala in 4233 Tu. Not long after he became it's only learder.

Bai'ala first served as a platform for manifestations, but under the new leadership it turned into radical organization. It's terrorists are responsible for sixteen huge bombings arount Cosmopolitan worlds. Pom Karr murdered civilists as it was the only way to wake up the Xot-numbed Agan authorities from their letargy. His deeds soon got him on Liga's black-list.

Pom Karr ultimately realized his many mistakes and was overcame by his conscience. After marrying ex-Ligan Tokara he wanted to start his life anew on Kogan, dreaming of simple farmer's life. Sadly, it was way too late for him. First, his bodyguard tried to poison him, unsuccessfuly, then Ligans started chasing him. He was killed by a Ligan and his wife Tokara took up his place as a leader of Bai'ala.