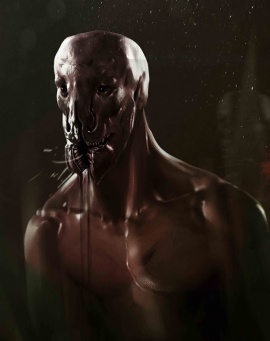 The mission of pouchers is one of the most important in the whole Ilokajish culture. A poucher creates and fixes the recycling pouches, thanks to which the Ilokaji reproduce. Even though the entire process of creation and composition of pouches is very well guarded, the scientists already understand its principles. The pouch is no mere cocoon - it is rather a form of a tumor which the poucher allows to grow and mature on his own body. While repairing an existing pouch, the poucher reconnects with the pouch and attempts to "patch" it using his specially adapted weaving mouth. Since the patching instigates secondary and tertiary cell division in the pouch, the cell structure no longer holds as strongly as in a new pouch. It is thus impossible to keep patching a pouch forever as it will eventually break apart despite all the care and effort.

Practically any Ilokaj can become a poucher, but the choice has to be made in an early phase of one's unlife. The change itself consists of adapting biochemical processes in one's body and by a surgical change of the mouth. The freshly adapted poucher leaves for the Sua'Ilokho, where he learns to listen and understand the new bodily processes in the company of other pouchers and also starts creating peptids necessary for the creation of any recycling pouch.

Working as a poucher is very dangerous due to the vulnerability during the connection with the pouch. The poucher has to fully focus to direct the bodily biochemical processes, which leads to severe exhaustion after the creation or "patching" of the pouch. In this critical phase, pouchers thus release poisonous toxins into their surroundings to protect themselves from possible intruders.