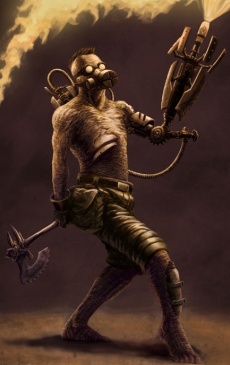 Bane swiped the axe to the circuits, because it has already droned too much. Then I saw Ponht as he reloaded his flamie. Pukeworm rushed froward, he thought he’s gonna eat us! We fried it, yeah we did. The boss gave us a few trins more that day.
(Coraabia Artist: Arturo Aguirre)

The job of a pyromon is a risky and ungrateful occupation. While all kinds of firefighting forces extinguish fires in the cities, pyromons create them several kilometers away in the Perifery. It sometimes occurs that some earthquake or movement of tectonic masses cause the dump outlings to spring. These will reach the surface and because of its highly toxic components it poses a threat. Squads of pyromons are designed to burn everything organic to ashes in the Dump. The local sources of radiation or toxic garbage are a big unpleasantness, the biggest problem lies in thousnad years old organisms and meta-parasites, which can easily contaminate a squad and cause massive epidemics.

Besides their simple metal head cover and an old flamethrower, pyromons basically don’t have any protective equipment. Because of this they have to rely on their natural resistance. In the early times, when there was a contamination of one person of the squad the leader burned the whole squad away. Today the regulations are less strict, the contaminated are faced through a several months of purification quarantine.

To create fires and simultaneously keep them controled requires deep experiences with work with fires. It happened many times that pyromons caused the burnout of spacious territories outside of their workplace. The catastrophic flame apocalypse which was caused by them by mistake in 3401 Tu beside the Little Taga Mountains could be watched from space for several Tols.