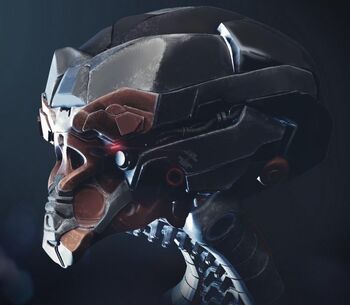 Qach Mannnq used to be a member of the guild 100-son but his slacking and tendency to critize his superiors forced him to soon leave and start over. A stroke of luck landed him a job as a boter supervisor in the ghettoshipyard Qqqao-G. Mannnq has an outward persona of an honest and moral Wak but beneath his metal shell rests an unscrupulous opportunist. He risked borrowing money from a loan shark, bought few decommissioned bot, and let a unit of bribed konstruquakks renovate them. Then he sold them to Annor under an alias and earn a small fortune. When the trap sprang and Annorian buyers realized the majority of these bots were but polished gutted semi-products, Mannnq already enjoyed his illegally earned riches in a luxurious resort on Ko-Monwa.

Since not even Annorian money grows on trees, the mastermind of such a collosal fraud was soon a very wanted man. The tracks led investigators to the ghettoshipyard and the noose was tightening around Qach. Yet before the corrup konstruquakks manage to snitch his identity, he fakes a work accident that kills every single one of them. To avoid any further problems, he immediately takes a job in the xottery QaWaX.

Mannnq gradually works his way up from a regular Xot grinder to top management. His shady practices that multiply the value of shards are soon used in all branches of QaWaX. Qach buys badly grinded Xot from the entire Coraabia and skillfully mixes it with high-grade one. His wrongdoing is a public secret but thanks to brutal terrorizing of competitors, Qach has yet to find his peer in the business.