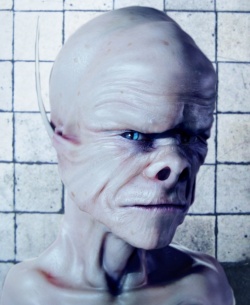 Qin Bolas was until recently one of the elite lawyers of the Epleef & Dillo xottery concern, but presently he is serving his long-year sentence in prison. The cunning Ekhro was used to interpret laws in his own favour ever since he could read and was always eager to earn something with it. Qin studied mograt law on Agan and soon afterwards started as an advocate clerk working for Amala Roh. Already in this post, Bolas demonstrated scorching effort to find gaps for self-enrichment in the complex system of notices, Bureaulogs and regulations. After scandalous revelations that he forced his client to pretend to be his own degenerated clone - in an attempt to gain compensation - the unfaithful advocate silently removed himself from the view of the cosmopolitan bureaus. His next stop was a remote dumpworld with an ideal bureaucratic spawn for his next law machinations.

Qin brought with himself a lot of false accreditations and recommendations. During the journey to Coraab, he went through the basics of the coraabian law and already after arrival he did not hesitate to rudely apply for work in the most prestigious positions. His finetuned portfolio made a good impression on the managers of a famous xottery. The unknown ekhro advocate thus became one of the best paid experts on Coraab just during one single Haze.

Bolas however made a significant mistake – he ordered re-evidence of rich supplies of commodity-cuts of Xot to raw samples in an attempt to free them from the so called chip tax. The amounts were so big that the concern's machinations drew the attention of the Great Bureau itself. Qin was convicted of a billion-trin fraud and was imprisoned soon afterwards. His lawyer career thus most likely ends behind the prison bars.