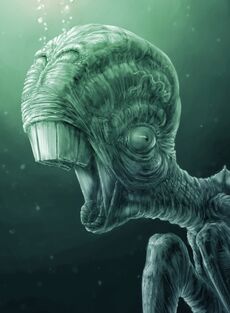 Qubba is one of the many subspecies of the amphibious nation of Soops who have inhabited the complanet of WaalkWak since times immemorial. The tenacious creatures quickly adopted various scientific and technical disciplines upon which they built a successful and powerful transplanetary economy. The amphibious Soops are divided into many subspecies that are greatly diversified. Qubbas build their settlements both ashore and in the depths of planetary oceans while e.g. the subspecies of Unqqqa lives solely in aquatic environment. There is currently around a billion of Soops living on WaalkWak. Other hundreds of millions operate throughout the entire Coraabia. Foreigners often mix up the terms 'Soop' and 'Wak' which makes Soops furious. Being a Soop implies a certain ethnicity whereas under certain circumstances, anyone living on WaalkWak for long enough time can become a Wak. Qubbas are the most common subspecies in the Soop population.

Qubbas inhabit both worlds today - the titanic Waalk as well as the smaller yet more developed Wak, their original homeworld. Waalk was not colonized until around -1500 Tu. Soops exploited all their supplies of precious metals and bimethane on Wak by then and naturally expanded their territories to the closest satellite within several following centuries.

The era between -520 Tu till -460 Tu became to be known as the 'dark age' among Soops. A gigantic solar eruption of the home star caused a fatal collapse of the industry. The eruption affected 50-60% of the populated surface of WaalkWak and decommissioned all the facilities powered by bimethane or electricity. The Qubbas themselves barely avoided extinction in that critical period.