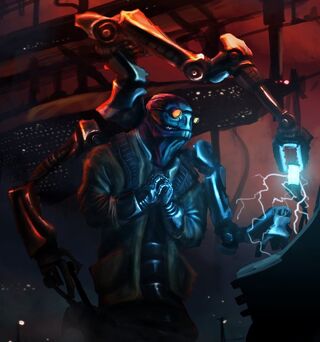 He's a wacko. When he sees a gadget he can tinker with, his eyes are all ablaze. I'd say he even sleeps with his own screwdriver. He should get a chick. - Sonar
(Coraabia Artist: Steve Hamilton)

Soop Qukkk'Qatta-Qot was born in Soop ghettoshipyards as a class one konstruquakk. He was always outstanding in his work and was interested mainly in fields of thermogenesis, post-metallurgy and secondary wet fusion. Qukkk also had a hobby that his superiors didn't exactly approve of - he took interest in scientific works of experts outside of the ghetto. After many arguments with shipyard management, he underwent an adaptable survival course and left the Waalkian oceans. His craving for knowledge was simply stronger than him. After many Tu of intense self-study, he finally settled on Cosmopolitan Agan. Here, his immense knowledge immediately caught interest of Liga, an organization he never even heard about before (based on the old agreements, Liga has no authority in the Soop territories on WaalkWak). His life finally started to change for the better.

In Liga, Qukkk was at first offered a post of the head scientist. However, when he learned of the extremes which Ligans had to face in action, he wanted to support them and asked for enlistment in one of the operation Teams. The leadership strictly refused, as they considered it too risky to send off a scientist of his importance on dangerous missions. When he threatened them with resignation, Donner reluctantly agreed.

Thanks to Qukkk's unique prototypes and experimental weaponry, Team 3 composed of trio Kassio - Qukkk - Hand thrived like no other. After Kassio's death, Team 3 got disbanded and Qukkk soon moved into elite Team 1 under Sonar's command. Thanks to all these achievements, Soops consider Qukkk their greatest hero in the entire history.