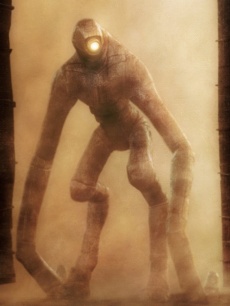 Ruuga, roughly translated, means hulking. Ruugas are a result of Miner's genetical engineering, complex Vatter breeding project aimed on creating entirely new Unliving sub-species. They were supposed to be tough, resilient and boundlessly loyal to the Miner Lords. Near the end of first millenia of mining, the genetic engineers of Co-Tal colony reported successful hatching of the first Ruuga batch. They however quickly found out that Ruugas are far below initial expectations - they lived for pitifully short time, were susceptible to various infections and were at best as intelligent as an average Dung. Their only advantage was fast and easy breeding in artificial reproduction vats. Their numbers grew bigger with every passing Tu.

Other Unliving (especially Ilokai) despise Ruugas to this day, seeing them as inferior servants of Tal usurpers. Ruugas were often murdered by their own brethren in the colonies. The situation ultimately forced Tals to separate Ruugas from other Unliving. In the end, they killed off many of them with the help of Vat scabies epidemy.

Today, Ruugas are mainly used as security guards, escorts of Unliving potentates and as couriers. Their population is however in dramatical decline, it is estimated that mere 2% of the original numbers still languish on Coraab. Min'Ora has a gloaty saying: If you want your problem solved, hire a Dung. If you want a problem created, hire a dozen Ruugas.