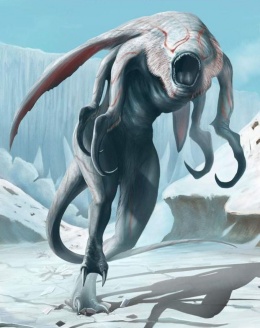 Sairuuk has one of the fastest metabolisms from all ruuk breeds. Its feces are a key ingredient in a variety of Traxolian cleaning compounds.
(Coraabia Artist: David Melvin)

Sairuuk is without any doubt one of the most widespread species in the entire Xennozone. Sairuuks are resilient, fast breeding omnivores with unsatiable apetite. Unfortunately, their meat is highly poisonous to most carbon-based lifeforms. Vast populations of sairuuks would otherwise easily feed whole worlds. The legendary herds on Ymef count as many as several million specimen and during the mating season, they easily overshadow the whole sky over the central archipelago. In Ymef's thin atmosphere, sairuuks are capable of flight thanks to their pair of muscular sail-arms; on other worlds, however, they must depend on the two remaining pairs of clawed limbs that still make them capable climbers. Although blind, they orientate extremely well in any environment through advanced echolocation.

Thanks to its specially evolved digestive system, sairuuk is capable of devouring nearly anything. A known case describes an overpopulated herd of these ruuks that managed to literally swallow a whole xennological observatory on Forneek, including a warehouse storing toxins and bio-acids. The unlucky scientists overlooked the fact that the pukeconcrete used for construction of their facility was a favorite sairuuk treat.

Sairuuks can devour half a ton of food per day. On Coraab, they became infamous mainly because of the criminal activities of Xun Tchwo - he used to toss his opponents or debtors into a pit full of death-starved sairuuks, which he once confiscated from one of his former business partners. It only took several dramatic moments for any poor victim to be eaten alive.