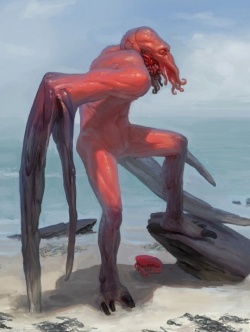 Segga depicted in the role of a rich krunari playboy in a shot from the vi-log Clam from the Deeps.
(Coraabia Artist: Devin Platts)

Sun setting down upon the Yttorian muddy beaches, furry date drink full of exotic ingredients and a rich krunari clam at his side - that was Segga's long-term plan. The short-term plans included more-less legal means of how to realise it. Thanks to the high level of confidence he was born with, Segga got his hands on the production of local vi-logs for a short time, occasionally acted in xenoporn, evaded government taxes and so on. In addition to that, he seasonally made some extra money selling non-functional trans-pods to xenno fools, who could not refuse him due to his natural charm. The worldling Segga loved tourists. He invested majority of the earned Xot into beautifying procedures and deparatization in order to move around the beaches clean and attractive, ready for any opportunity that could potentially arise.

Segga had to undergo even several extreme enhancements to reach his ideal look. Those included grinding and polishing of his shell, but also short-term boiling in tanks to get the prized red-toned colour. This fired back on the young krunar in the moment, when he fell asleep in one such tank. Thanks to the vigilant personnel, it was possible to lift him up and save his life, but he lost sense in his arm-claws forever.

With the sense-loss in his claws, Segga suddenly lost also his sense for success in life. During a xenoporn shooting, he severely injured his partner, tourists gradually ceased to believe him and the tax office eventually confiscated his remaining money. Once the vain Segga did not have enough for the costly care for his body, he collapsed into himself. Broken, abandoned and full of parasites he slowly succumbed to dehydration on the sun-lit beach.