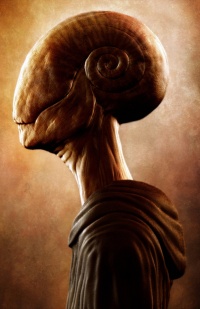 His fortunes are a fascinating mirror of Coraabian society. I would like to thank him the most for this award, may he rest in Dump. -Ishta Mubara • 4263 Tu
(Coraabia Artist: Riyahd Cassiem)

Sheleb's unlife was full of marvelous and often bizarre events. This illiterate lasturo was once found in the ruins of a burnt down complex of company Kraasox and briefly made the headlines of sub-journals as a miraculous survivor of a mass disaster. Several Tols later, poor Sheleb was kidnapped by Pentagoras' band of smugglers to the far Periphery, where he had to serve as a bait for fearsome Hypomors. However, the antigrav crashed on the way and battered Sheleb reappeared in civilization after some time. Here he was found by Agan documentarists who were coincidentally shooting the iconic sub-doc C'Orion in the poorest sectors of C'Ora in 4253 Tu. After the success of the movie, Sheleb became literally overnight a symbol of Coraabian poverty and degeneration.

Sheleb was an extravagant and eccentric lasturo, who always and under all conditions properly enjoyed being in the spotlight. He was famous for his skirmishes with the law, during which (often greatly drugged with rokos smoke, known for its toxicity as the "scourge of shells") he climbed on the casing of surrounding buildings where he blew smelly nasal acid mucus on lawmen beneath him.

Sheleb forever stuck in the public's mind due to the iconic scene in which he lies down and dies after reporter's last question. However, the passage was a calculated emotional fiction for which he got paid well. In 4260 Tu, the sub-journal Humpitch! shot a scandalous report with him which debunked this scam. Shortly afterwards, this lasturo was found dead in the central Sector 2 - this time for sure.