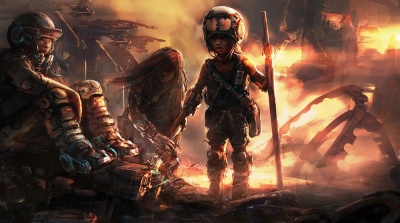 Khor'bael, which means 'State of bones' in Coraabish or simply Skeletarchy, was a regime taking place in C'Ora between 3.450 Tu and 3.501 Tu. The period belongs to the most critical times of the Centropolis Era. The atmosphere in the society was tense those days around 3.400 Tu. A clear majority of C'Ora's Unliving population was highly xenophobic towards the immigrants. Still more and more of those were coming as their influence on Coraab had been rising. The ethnical struggles got more brutal, finally leading to bloodshed of a civil war. It ended up with a period called Fifty Years of Skeletony.

Endless skirmishes between Miners' putschists and the Unliving were ruthlessly solved by Baels who ban-bombed the first seven sectors of Coraab's Centropolis, razing it to the ground. Leaders of both rival fractions were thus eliminated during a single Haze Day. The attack paralysed the city's society completely. It was by far the bloodiest act of Baels who till that day had expressed their beliefs only by means of diplomacy. The entire Coraabia suffered a shock.

Supreme Skelethor Ulthaao, also known as Ulthao or Ultha, benefited from the upcoming chaos and took the lead over Coraab. With his iron fist, he won allegiance of the torn world again. Miners' Cor'Tal was dissmissed and all the key possitions were occupied by Baels. During the fifty years of Ultaao's rule, the society indeed got a second breath. The costs were a submission to a total dictatorship and forced overhaul of the entire social and cultural life in C'Ora. Ulthaao's probably most important act was the Great Coraabian Declaration. Representatives of both rival parties signed it in 3.491 Tu saying that the Unliving shall be equal to the living from now on.

Fifty years of a transplanetary trade embargo had passed and, shortly after Skelethor Ulthaao's death in 3.499 Tu, Skeletarchy was officially dissolved by a council of Skelethors.

It surely was one of the darkest but also the most peculiar periods of Coraabian history.