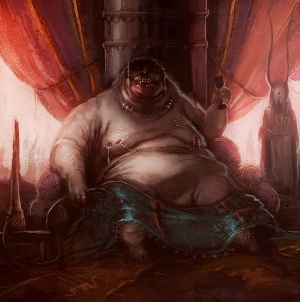 He's a beast. He feasts on the suffering of other beings. I'm sure the entire C'Ora wishes him dead. - Tsun
(Coraabia Artist: Sam Lamont)

You would have to cut deep through Smogod's fat to find his spine. The brutal boss of the loan shark syndicate B.U.N. began his career as a lowly organizer of kleeman-eating contests. After some time, Smogod became rich and purchased several outgoing government smokehouses to produce his own smoked kleemans. The meat business eventually bored him and Smogod freely moved to the haze market as a loan shark. This business made way for Smogod's malicious sadism. When a debtor does not pay, the obese Antu has him cut to pieces which he sends around the borrower's family with a kind reminder to repay the remaining amount. It is said that he keeps the best meat parts for his Unungai dancers, which he proudly keeps around himself.

His visceral urge drove Smogod to all corners of Coraab, where he rapidly overtook the reins of illegal loansharking. His cutthroats are responsible for deaths of thousands of defaulters around the planet. Smogod's hobby is to gobble up buckets of smoked kleemans while watching his victims' struggle before the Unungai cut them to pieces.

Due to his abnormal obesity, Smogod gradually stopped walking. His addiction to Rokos smoke grows stronger and he also becomes a heavy drinker. He is managing his ever-growing business from one of his secret residences. In 4272 Tu, an astronomic bounty was set on the boss of the B.U.N. syndicate by the government. Other criminals do not like Smogod either - Kargando recently said he would do anything to kill the fat Antu.