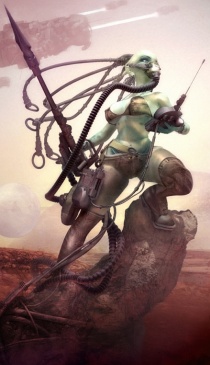 One of the most famous living Sols. Garama Varga descends from a powerful Khalfassan family which was massacred in 4170 Tu by unknown assassins. As a last survivor of her lineage, Garama took over Vargan trade empire in her early youth. The young girl fell in love with some Iko Thurm, a Rad'Zaakian arms dealer. He taught her sharpshooting and sparked her passion for warfare. Together they served at shock troops Ssafan, together they were selling smuggled Indigo-bots at CuCaan. Eventually, they had a daughter, Scara. Iko became more and more busy and spent most of his time in his native Kla'Waska. Garama eventually joined him - after selling the entire corporation to her competitors, she unexpectedly oscillates after her lover to Rad'Zaak.

After her arrival, Garama found out that Iko has been operating under the name Sol Ikka in the Sol caste for some time already, all the while keeping it a secret. Ikka died in 4223 Tu in a bloody civil war that suddenly broke out during his mission at Yttor. Shocked Garama spontaneously joined the caste in his stead. After adopting the name Sol Gara, she severed all family ties and began a brand new adrenaline-packed life.

Besides the large company, Ylas Varga left her daughter Gara a vast Xot fortune as well. She later donated the full amount to the Sol caste. It would have taken only a few more votes for Sol Gara to become a new Solmaster during the last elections in 4237 Tu. Old Sol Eru was very fond of her and endorsed her candidacy right before his death. Sol Mon went on to narrowly beat Gara 1.04:0.98.