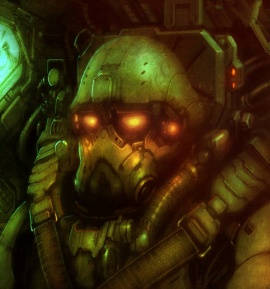 In 4240 Tu, Saldunacer was in command of a failed CuCaanish mission on Rad'Zaak. That might be the reason why he suddenly left the army.
(Coraabia Artist: Alex Iglesias)

Also called Sunruuk. One of the Sols secretly operating in the Annorian system. After some time, the local economy registered an unmistakable decrease in the overall count of ruuk herds. In 4190 Tu, Liga became involved in the situation and uncovered a large network of corrupted officials that traced back to the Sol caste - it was found out that this illegal business with ruuks was masterminded by some Sol Sun. The problem was that nobody ever met any Sun and even the Sols themselves stubbornly denied his existence. Mass arrests swept through the Annorian establishment, though ironically, the amount of illegally exported ruuks skyrocketed as a result. It is said that this Sol Sun and his henchmen managed to export more ruuks from the Xennozone in the course of few decades than the Annorian government throughout whole centuries.

Sun has a fleet of transport ships and few thousand loyal xennohunters at his disposal. Of course the Sols have lied when they denied Sun - his business is a key pillar in funding the whole caste. All the more absurd is that Sol Sun is secretly supported even by the ruling Annorian family - Sols pay fat commissions to the corrupted Annors in exchange for his impunity.

Sol Sun was formerly an influential CuCaanish Armo named Saldunacer. After being compromised by shady dealings with Khalfassan smugglers, he has been banished from CuCaan forever. However, he has recently returned and bought up several centropolitan quarters in CuCca under false identity. All the locals were deported so that he could rest there undisturbed - in broad daylight, in front of the unsuspecting officials.