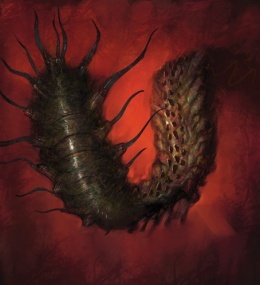 Ancient ancestors of swellers inhabited the underground dumpstreams already in the times, when the first unliving came out onto the surface and started to adapt themselves to an unlife in this new hostile world. Swellers were formerly called moa'min (vaguely translated as long multiplicity). The unliving worshiped them as sacred beings and kept them im tank-altars in many of their residences. Later it was discovered that some of the domesticated swellers transmit a variety of degenerative diseases in their bodily secretions. The fundamental mistake was that these meta-parasites were then released back to freedom. A massive overpopulation of swellers happened during the construction of the new coraabian centropolis - the local dark and complex sewer systems were a true swelers' paradise. In 1590 Tu the population of swellers living underground the C'Ora was estimated at an incredible amount of three billion individuals.

Adult swellers may grow up to fifteen meters in length. They feed on carrions, sewage and other biological garbage, which they filter using the so-called Hikalraa's apparatus. The surface of their body is equipped with dozens of tactile cilia, which facilitate their movement and help them with orientation. Swellers are blind, but using their cilia they can simultaneously explore up to one hundred objects per second. This provides them with a real picture of the surrounding environment.

In the past, some unliving tribes tortured captured miners by ligating their limbs and throwing them into a shallow tank teeming with hundreds of swellers. Those have ignored their victims until their limbs began to decay. This started a long and painful process of gradual body dissolution, often in full consciousness of the captured individual.