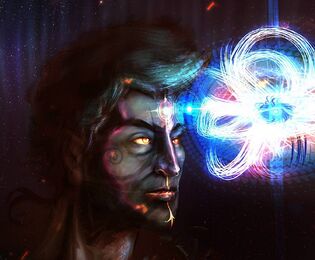 Bor Khal - a direct descendant of the famous Tal bloodline leading through the thousands of Tu to Bor-Khakei himself.
(Coraabia Artist: Nikola Yordanov)

Tal is a word originally from the Tal Minerish. It translates to Lord or Lady of Excavation. It was a Miners' title reffering to leaders, powerful members of the ruling class, or someone in charge of a Tal colony. The title Tal was originally used for both men and women.

Calling someone a Tal was a privilege reserved only to the ruling castes until 191 Tu. After several incidents and founding of the lord council Boroa-Tal, the term was used by Miners as a general refference to honorable public figures until 1055 Tu. After that moment, its usage was abolished and even banned for a long time. In later millenia, the word became to be used again by traditionalist city Miners but it lost a lot of its previous prestige. In today's C'Ora, any "plebeian" calls himself Tal even though he's just a taxi-graver, corrupt bureaucrath, xenopimp, or hotelier.

The greeting Tal Kaa (Tal bless you) is used solely within the Miner community.

Tal was also used as a basis for naming the biggest mining colonies. During the first centuries of the violent colonization of Coraab, 17 Tal colonies had been built on the monocontinent.