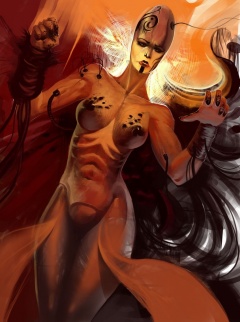 Talla never hesitated to show her body. This rare footage comes from the time her career was reaching its inevitable end.
(Coraabia Artist: Elisaveta Petrova)

This sub-net topmodel and occassional movie star definitely didn't have an easy life, despite it being lined with big achievements and some of the most lucrative offers. Talla came from a family of Mograt immigrants who originally arrived on Coraab from the Cosmopolitan Worlds. She was born as Turendyth Wozsella but she changed her name in the beginning of her career to a simple pseudonym (in the Miners' language, talla means something like a lass). During her hectic life as a supermodel, Talla became addicted to drugs and in the end was found dead in her residence. She was only forty-three Tu old at the time - a very young for longevous Mogras. Talla overdosed herself with a combination of Kerong and strong barbiturates. Her death was a story of the year for all Corabian tabloids.

Talla absolutely hated another supermodel Mooda Rai, who infatuated her third husband during the recording of the sub-movie Degdro. One day, this hatred escalated in a catfight on the stage - apart from few minor scratches, Talla also brought home a sizable dose of radiation which Mooda emanates when enraged. The daily sub-journal Humpitch! later speculated that this was the cause of Talla's hair loss and the reason she started to wear a wig.

In the beginning of Talla's career, she allegedly starred in the xenoporn Tentacle Fair 4: ReveaLass. However, her scene was cut out in the end and the full version of the movie was never published. Nevertheless, the name of this movie has been in the TOP100 of the most searched terms on Coraabian network oroi for the last twenty years.