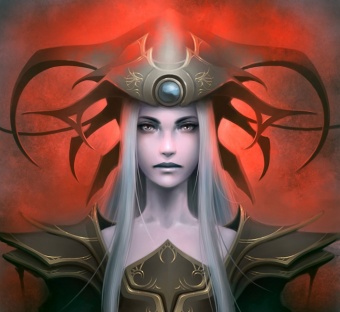 Tokara - a cold-hearted and self-seeking beauty who does not hesitate to eliminate anyone who stands in her way
(Coraabia Artist: Hrvoje Beslic)

Manna Tokara is the middle of five daughters of the Troi prefect Tok-Nel. Since an early age, all the girls have been provided with a superior education because it was expected that they would follow their father into politics. Three daughters kept the commitment, the fourth one tragically died during a terrorist attack on the magrav Sarkass III in 4236 Tu. The fifth daughter opposed her father's will and secretly studied the art of war - she planned to put her combat and tactical skills to good use in the Liga residing on the central Agan. That dream made bad blood between Tokara and her father, forever splitting their paths as the traditionalistic Mogra-Troics were in a long-time dissension with Agan and they have never acknowledged the existence of Liga since its establishment. Tokara truly excelled as a Ligan at first; problems came only later, after the fateful mission on Sheren-Ssa.

Attractive Manna Tokara was strongly promiscuous ever since her youth and she has always used her charms to her own benefit. Quite a few men succumbed to her enticements during her service in Liga, be it Dogont, Kassio, or Gamoa. Tokara has always been able to wrap her lovers around her finger, manipulating them so as to obtain any information she needed.

As a matter of fact, Tokara is secretly married with Pom Karr, the leader of a terrorist group Bai'ala. It was her who inspired him to attack Sarkass III because her sister knew about their secret marriage. After the arrival on Sheren-Ssa, where she was supposed to take part in a strike against the intruders of holy places, Manna Tokara disappeared. She was pronounced dead after few years, but the truth is it was right there where she deserted to Bai'ala for good.