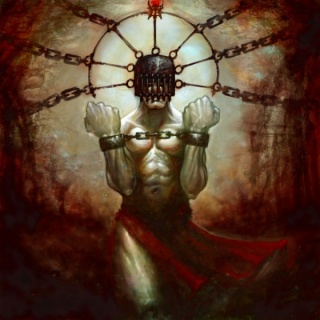 Tupox travelled across half of the known multiverse, even though the sight of a new world intrigues him about as much as a grey wall of a magrav cargo bay. Travelling is actually less than an afterthought for this weird Antu suffering from a psychosomatic birth defect, which has first demonstrated itself in his youth during intense gym workouts. The euphoria stemming from muscle stimulation forces him to blindly repeat the same movements over and over again, eventually secluding his mind from the outside world. Since he has to repeatedly satisfy his bodily needs, he made his living as a magrav heavy cargo carrier - one that does not know when to stop. Tupox often loaded more cargo than was intended, virtually barricading himself inside the magrav with no chance of getting out and thus forced to tag along to its target destination.

Magrav pilots enjoyed dropping him off at the first stop, but not before forcing him to work off his travelling fees by performing the worst kind of labor around. The more difficult and painful the work, the more satisfied Tupox was, which is why he started to willingly provoke the crews to punish him with tasks that would bring him closer to the pleasure from exertion and pain. In the end, he began asking for his fix by violent means....

During a journey of an Uzgec magrav to Traxol, the crew was so afraid of Tupox they forgot to provide him with sufficient pain. The unbearable tension brought Tupox to killing nine crew members with the flat end of a pukeshare. The sub-journals relished covering this event and Tupox got punished with 35 Tu in the Goa'Kach. Not even a single Tol into his sentence, Tupox beat himself to death against the door of his solitary with an insane smile on his face.