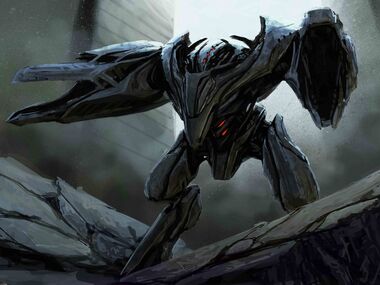 The Sekk'wa company that introduced the Turgor series to the market has a very suspicious ownership structure. Investigation suggested (but did not prove) that it has connections to other companies controlled by the Sol caste.
(Coraabia Artist: Seifoubalana)

The creators of the Turgor bot series, which was introduced to the market in 4259 Tu by the Sekkk'wa company, trusted an imaginary knife to the back of all concurrently developed artificial intelligence projects. The machine included everything that the competition was thinking about and shifted the horizons of possibilities by a good bit forward. Turgor is powered by crystalline aggregation, which replaced the heavy and massive reactors. The weaponry system is comparable with traditional bot concepts, but the manoeuvrability and size are far beyond any comparison. Turgor's UI and the supplied interware is the imaginary jewel on top of its crown. The bot is capable of analysing huge quantities of information and immediately adjusts its combat routines. A practice combat with an Indigo-bot - which Turgor purposefully did not have in the database - proved clear prevalence of the new combat unit.

One of Turgors possible disadvantages are its heavy weapons - a pair of massive arm-mounted grease cannons, whose charging time takes half of an Om for a single shot or ten Oms for a burst. They are - de facto - adjusted orbital emitters, so their destruction-capability offsets the remaining disadvantages. Unless the bot's task is to tear down a building or destruction of massive objects, his secondary armament is more than sufficient.

The Sekkk'wa barely managed to produce a hundred of Turgor units before being paralysed by legal actions for industrial espionage suspicion. The motoric sensors, defence mechanisms, interware parts and other equipment was believed to be way too similar to other competing projects. This version was supported by evidence that the first produced Turgor units used carefully adjusted functional versions of these competing prototypes.