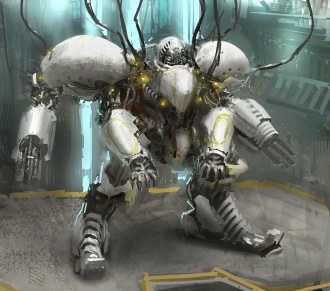 "Do not fight unless your employee benefits tower over others' at least by half!" - One of the slogans hailed during the general strike of Urban-ops in 4090 Tu.
(Coraabia Artist: Ling Yun)

Centropolitan public order units urban-ops were established only few decades after the era of Fifty Years of Skeletarchy had ended and with minor modifications, they operate up to this day. Originally, they focused primarily on the protection of immigrants against acts of xenophobic intolerance commited by the original inhabitants. Gradually, the urban-ops in C'Ora have also taken over the supervision of public events and demonstrations, suppression of eventual riots, and operative interventions against angry crowds, whether they were sports fans or fundamentalists. They are more than happy to let their colleagues from aglomeros handle bulkier opposition, though. The creed of "urbans", protected by huge mechanical exoskeletons, is: Do not fight unless you tower over others at least by half.

Resistance fighters have eventually learned to counter the urban-ops troops effectively. During their riots, radical Dung fans of Vats Rekrmich covered the exits from Un-Nom-Pak stadiums with hyperviscous fluids, due to which the clumsy policemen practically could not walk inside. Fanatical Ilokaji have also learned a neat trick - to shoot at the weak spots in the bends of joints.

Governor Zula was several times just a step away from dismissing the less and less efficient urban-ops entirely. However, his advisers have talked him out of doing it every time. Urbans' exo-skeletons have been traditionally produced in factories of Corash guilds, which are in a desperate need of lucrative government contracts in order to secure additional funding for their new ambitious projects.