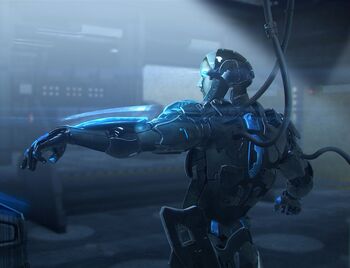 Even the handsome Urnill succumbed to the seduction of Tokara. The romance was over in the moment, when the enraged beauty threw him out of house in the middle of the night - the narcissist was looking at his own uniform dressing records during their love-play.
(Coraabia Artist: Adam Kuczek)

Urnill joined the Liga on request of Donner himself, who assigned him to the Team 12. There he used every occasion to demonstrate his abilities and soon became the commander's deputy. It did not take long for his team-mates to find out he is a poseur, who often claimned the team's successes as his own. This backfired on him in a moment, when the ligans left him alone outnumbered during a mission on Kokran, so he could show his "full potential". In combat, Urnill relies on the most advanced class of nanotic exoskelet - (N.E.S.), which not only protects, but also supports coordination of movement and gunfire, tissue regeneration in case of exhaustion or injury and to certain effect also helps with combat decision-making. Only thanks to N.E.S. Urnill survived and to the surprise of himself and his team-mates, he successfully completed the mission.

After the "Kokran" incident, Urnill requested from the liganor immediate public investigation and exemplary punishment of his colleagues. The answer came in the form of Ibar Ratan wicked laughter, who - in the presence of the liganor called him a "child that needs his scratches fondled". The mission records confirmed Urnill's words, but nobody got punished in the end, as no losses were incurred. As "smart money", Urnill later receives the commanding post of Team 10 from the leader of the Liga.

Urnill is doing his best to become a favourite of the new liganor Gamoa. He advises him on how he would deal with the matters of Ligy, he brags about his achievements, talks about him self a lot and even compares himself to the new liganor, whom he finds almost as beautiful and successful and he is. Gamoa keeps ignoring him and later even openly supports a person Urnill despises most - Ibar Ratan and his public claims on the Lordly moon.