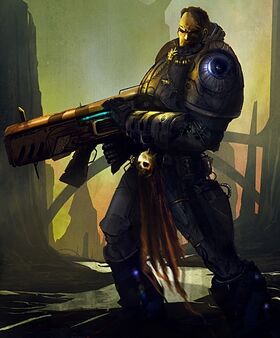 Valak's life is a story of a lust for limitless power. During the following attempts to retain his status, Valak loses his fight despite cosying up to all sides.
(Coraabia Artist: David Lecossu)

Also called Ligan Death. The admission of Kashtan Valak to the Liga is often reminded as one of the biggest mistakes in the history of this organization. At first, this ligan was seen as an able professional, a tough and merciless warrior. Valak went through a crucible of numerous conflicts: he commanded the Tal-Kar squads in the battle for Seu'Neba and organized many rebellions against the Kleu'Ziban Dictatorship of Five Lights. But from the beginning, this Mograt played a double-faced game from his position of power. The renowned Tongenton, then in charge of the Liga, offered him leadership of the Team 17, which was specialized on cooperation between Liga and military forces. Gradually, ligan Valak obtained such a huge influence in the military sector he could continue with completion of his ambitious and ruthless plan.

In reality, Kashtan Valak was an undercover member of the mercenary Sol caste, where he was known under the alias Sol Run. Behind the Liga's back, he secretly provided all kinds of confidential information to his true masters. The situation became so dire that thanks to his connections with Sols, Valak could personally organize a putsch in one of Agan's prefectures in 4159 Tu only to bloodily suppress it soon after as a heroic leader of Team 17.

The whole situation eventually reached monstrous dimensions. Valak did not hesitate to sacrifice his subordinates from both sides to achieve his own personal goals. At last, the leadership of Liga discovered Valak's power schism. After two years of collecting evidence, Pjaar Kanth ordered to send out Wert to Valak's Agan residence, where Wert finally killed Valak in a fierce fight to life and death.