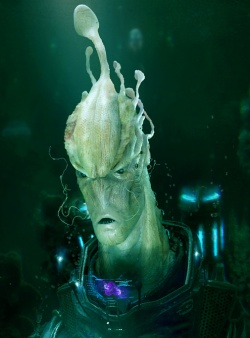 This ancient office of coplanetary supreme administrator is a symbol of the most stable political establishment of Coraabia, which WaalkWak definitely is. The title of Waalk means something between the Minister of Foreign Affairs, Governor and General Manager of the Wak society. Thanks to strongly liberal trends in the society, there are usually several Waalks in the office at a time, that share and freely divide competences and rule on the basis of mutual consensus. It is said that the bigger the WaalkWak's problems, the less Waalks rule the co-planet. In the dire times, effectivity and flexibility of the government are the deciding factor. While there might be eight Waalks ruling the WaalkWak in the time of prosperity, there have been two occasions of only one sole ruler.

The infamous Waalk SqannnnK was one of them. In 3668 Tu he intended to sell some of the artificial satellites of WaalkWak to the opposing Z'tran community. For this offence he was brought before the board and sentenced to life-long house arrest. The second sole-ruling Waalk was RaolQ WoaarkK, who after the death of two of his colleagues changed the law of succession to prevent anyone to become a Waalk.

Only a few people outside the co-planet know that in the Wak's declaration sub-log the Waalk title grants virtually no powers. The Waalk office grows to be only representative function, passing the state medals and signing international treaties. The practical side of the rule is slowly being transfered to the Tectonics, that are more oriented towards more important aspects of current politics: arms industry and the military forces.