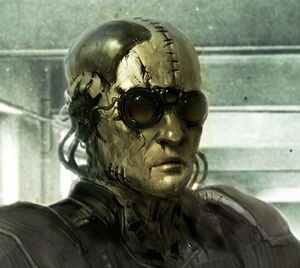 Director of Coraabian branch of important boter guild 100-son. Wal Qank, shotly after taking the post, proved himself to posses great organizational and managing skills, and that he puts the company's profits on the first place. Qank reduced boter numbers to a bare minimum and introduced an ingenious system of personal benefits and rewards that inspires 100-son employees to work as hard as never. By the competition, they are sometimes called boter-bots - thirty hour-long shifts with two lunch and bathroom breaks are a common praxis there. Wal Qank gradualy removes all Coraabians from higher functions and replaces them with strict supervisors from WaalkWak. His goal is to achieve a monopoly in bot production on Coraab.

Even though Wal Qank is an legitimate WaalkWakian citizen and he proudly presents himself as so, he is in fact a fully cyborgized Miner, that underwent series of courses and operations on WaalkWak. Qank tossed away his name and life to become what he is today. He sees adding aftificial parts to his body and syntetisation as a way to ideal of beauty - he expects his subordinates to see him as an example of such ideals.

In 4259 Tu, Qank wobbled to WaalkWak to meet with Kwa-Sokkk himself, the supreme guildmaster of 100-son. There, he was commanded to deal mercilessly with the Corish guilds, that seem to be catching a new breath and regaining thier lost glory under Kopibor's leadership. Qank secretly recieved huge amount of xot to finance his diversion operations. On Coraab, the boter guild wars are imminent.