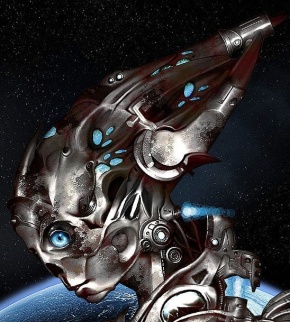 He is the purity and perfection itself. I don't know of any more effective and yet so concentrated being. He prioritises the good of others before his own ambitions. It's only his growing alienation that bothers me. - Dogont
(Coraabia Artist: Nekro)

Wert is a living legend. Today, he is de facto the only ligan serving in his function since the establishment of Liga itself in 4044 Tu. Wert has never left Team 4 during all those years; in fact, he is Team 4. Subordinates come and go, the boss remains the same. Already from an early age on, Wert was fascinated by advanced cybernetics. In 4050 Tu, he visited WaalkWak to undergo the first in a long series of surgical operations in order to enhance his body. Not much has remained from original Wert apart from his well-maintained neural network - this ligan is 98% cyborg. His titanium-corabit body can withstand a fall from one kilometer as well as a shot from a deck cannon. Many civilians believe that Wert is indestructible, which cannot really be disregarded as stretching the truth much. However, in the past, the Liga was often merely one step away from losing their "showpiece" for good.

Wert has his weaknesses of course. One of them are extremely low temperatures, under which his sensomotoric functions cease to work properly. A ligan agrava once accidentally shot him down near Khalfass while entering the orbit - ligan Wert spent several long days in the open space. If not detected by the near-flying Team 11, he would circle around Khalfass even today.

During his professional life, Wert has seen deaths of many colleagues and today he prefers solitude in disciplined self-denial - the only exception being old Dogont, whom Wert always respected and for whom he would do anything. As such, Wert politely declined a second offer from Donner to become the head of the Liga because he knows how much Dogont secretly desires the position.