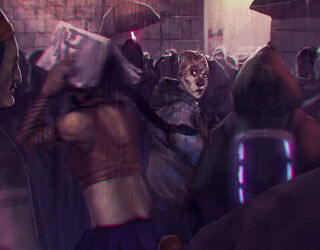 Xalien is a slang term for immigrants and foreigners in general who came to Coraab from another world of Coraabia. The term is used mostly by xenophobic Miners and Unliving who resist the influx of foreigners to their homeworld as they allegedly desecrate and destroy the thousand years old traditions and culture of Coraab.

The term is sometimes mistakenly used interchangeably with the word "xenno" (cor. hochta) which refers to inhabitants of Xenozone.