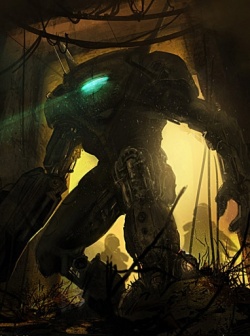 Xosoon lived a long, politically active life on his homeworld. For several periods, he was leading Seah of Defense and Honor , he became a lifetime president of the warriors union of Sooea Ttaebu. He was always interested in military history of Coraabia; he collects combat machinery and weapons. It was ligan Dogont himself who invited Xosoon to join Liga in 4249 Tu. Xosoon stood a real role model for Dogont. Xosoon gratefully accepted the function of a leader to Team 3. Soon he introduced a combat technique Ybitthabu in his unit that involves a shared strategic planning. He made Team 3 into a perfectly synchronized unit operating as one joint organism in battle, using an experimental sub-net interface. These ligans achieve extraordinary results in severe operations and represent one of the most powerfull tools of todays Liga.

Xosoon has a character flaw and it is his boundless selfishness and vanity. He plays many games, tries to get along with everybody in any situation. But he does not have any real friends because he is completelly absent any empathy. He spends most of his earned Xot for buying new historical weapons to extend his collection. People say that Xosoon is the second best paid ligan after Wert.

Xosoon put a series of subliminal hypno-mems into the combat interface of Team 3. He can deftly manipulate his team members through them. One of Xosoon's important acquitances is his old comrade from Sooea Ttaebu, the Coraabian intergalaktik Hermes. Hermes once buyed-secretly but with fat commissions-an operational stringar, one of the most valuable jewels of Xosoon's collection.