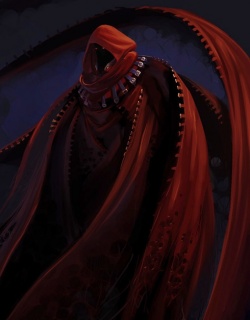 Xun Tchwo allegedly lived for as much as 450 Tu. At least on Coraab, his criminal activities were known for many tens of Guls.
(Coraabia Artist: Andrey Lazarev)

This star wayfarer somewhat strayed from the peaceful path of his brothers during his pseudo-life. Police annals start to mention Xun Tchwo's notorious criminal activities at the beginning of the millenium. Initially, the authorities knew him only under the preudonyme Vormit Prince, since Xun got very rich from smuggling Pukeworms to Coraab. He later left this business and received the nickname Xun 15, because he indirectly bought up most of the real estate in the fifteenth Sector of C'Ora and de facto began to build a state within a state there. His long-lasting stint on the dark side of the law was only ended by a projectile fired from a modulated weapon of the assassin Mina Mord, which was able to penetrate Xun Tchwo's pseudo-corporeal body and instantly vaporize him during a ceremonial opening of the local xottery.

Xun Tchwo was able to confuse people a lot - whenever he negotiated with them, he ingrained them deep anxiety, he foisted them experiences that never happened. It is believed that on several occasions, he convinced the policemen that came to arrest him to release him or to run from an imaginary radioactivity that was (not) consuming their innards. Once, they even handed in their weapons and let his minions to kill them.

The very Hand once dueled Xun Tchwo during Xun's secret visit to Agan. He planned to assault Xun, grasp him with his meta-hand and crush him - yet the criminal boss instantly instilled him with the idea to crush himself. At the last moment, the Ligan luckily did not manage to finish the self-damaging act since Xun was forced to retreat under fire.