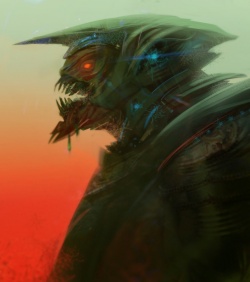 Legendary wrestler of the Joobo-Habuta, one of the oldest Dungs in the Un-Nom-Pak Vat League. Xurug's path to the career of champion was long and steep - soon after hatching he started working for mining company ToZanX, slaving in the deepest holes of the Great corabit well. When the mining operations closed in 4259, Xurug moved to C'Ora to try his luck in Un-Nom-Pak. The Nom trainers however resolutely rejected him for his high age. Xurug didn't budge and challenged Joobo-Habuta's champion to a ritual duel. Years spent shoveling corabit paid off, as he steamrolled the opponent with pure strength. This earned him respect and later acceptance to the batch. The very next season, vicious Xurug entered the tournament on position of Du'Nom.

Xurug's personal record is quite remarkable. Joobo-Habuta's fans loved him, nicknaming him Uku-Gul (Old helm). Xurug was the only known Du'Nom in league's history that began his career in age of over fifty Tu. He made this handicap into his advantage and ignoring the trends, created his own tactics. Some weaker batches, Dipong Parasites for example, even refused to face Xurug and his Noms.

During the Dung Gu-Rang uprising in 4270 Tu everything changed for him. Xurug, at the very last moment, joined up with his nemesis, Mugu of Vats Rekrmich. Although he initially wanted to stand aside, the Dung patriotism took over him, making him fight alongside Noms of foreign batch. The old Dung died during the retaliatory biological attack. Mugu later took his remains and buried him under the Dubbu-Rang stadium.