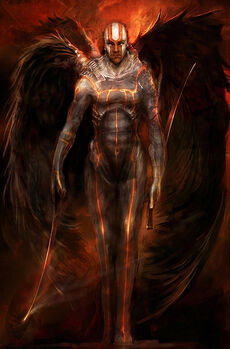 Yach-drog dressed in a allegorical costume of the flying spirit during the annual celebration of the holy places, called Min'Toru.
(Coraabia Artist: Yin Weiye)

Every story needs its narrator and given the widespread illiteracy among the Unliving, a way to pass their traditions down had to be created. That is why the Wigitic primus Raabdwa ordered to preach the Yach-Log, a sacred compendium of the Unliving tractates (min-logs), in the streets of Min'Ora all day long. At first, there have been only eleven yach-drogs, recruited for a limited period of time from the ranks of the high and mighty, who took it as a one-time populist service to the public. After some time, the position of a yach-drog was made official and the requirements for becoming one were drastically decreased. Nowadays, thousands of sanctified or self-proclaimed yachs wander around Coraab, ritually dedicating their unlives to the weaving of words. The general public views them as sacrosanct mystics.

An orthodox yach-drog must adhere to absolute asceticism, sacrificing all his desires and passions. Words shall be his food, preaching them his sole excretion. For a yach-drog to ask for a reward used to be a capital crime - yet that was way back when the yachs were still officially employed by the Min'Orian elite. Ever since the Kochaan-Popthar schism, the trade has been handled solely by private individuals.

On several occasions, some not-so-dutiful yach-drogs "modified" their teachings and claimed to be descendants of the divine Nu'Beings in order to enjoy a saint-like treatment in some obscure outpost of civilization. Many of them paid dearly for their arrogance though - for as some ancient religions say, burning the meat of a god powers the area with his sacred life essence.