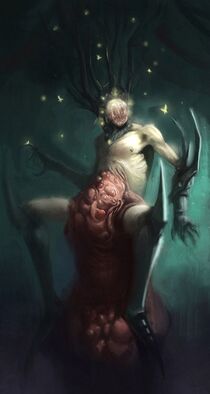 Yompu was created in a symbiotic merge of unknown exomorphic entity with mykomass, most likely during the peaking activity of mykoid colonization of the distant Xao world. Remarkable transformation of this world had drawn the attention of a mysterious traveler, who found out too late that mykoids are capable of consuming even a multidimensional potential of space-time. The digesting mykomass tore the shocked being apart, but did not reach the necessary level for consumption of his potential and thus it disgorged the remnants and left them to their fate. The "broken" being regained its mind only when the mykomass covered most of the surface of Xao and connected all its parts. After several unsuccessful attempts to radiate out of the mykomass, the being resigned on its new form and labelled itself as a Yompu.

Yompu continued in its original journey across the multiverse. In the mykomorf form, however, it could not observe the reality from the higher level of existence and for this reason it recreated its form to match the local organic civilization every time it reached a new world. Yompu was created from a higher amount of mass than common beings and thus unwillingly become an honored patron or a hated demon from the local legends.

The last confirmed place visited place by Yompu is the relatively unpopulated para-organic world of Dud. Yompu engaged in an intense contact with the local planetary elite, which - as legends say - lasts even today. From the establishment of the Cosmopolitan worlds, nobody ever saw this mykomorf again. Yompu is most likely the only living being, which can communicate with the ancient Dud, thanks to which it gradually gains unmeasurable knowledge.