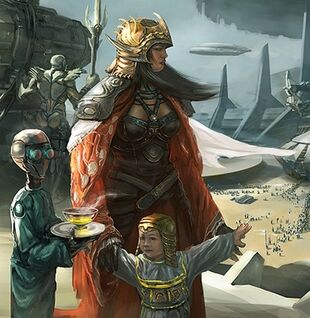 Born Tal Kusa-Gammah. The Legendary Lady of Excavation and foremother of the most powerful Tals once arrived at Coraab in the vanguard of Miners' magravs. She was always fascinated by the peripheral dumpworld and never left it until the end of her days. Thanks to her elite pedigree, personal integrity and certain kind of cordiality, her subjects always held her in high esteem and honor. It was indeed Ytterbia who financed the foundation of X-Tal, the largest and the most prosperous Tal colony on Coraab. She was a powerful and among fellow Miners very popular woman. However, she regarded the Coraabian Unliving as mere pitiful work tools and treated them accordingly. Tens of millions of slaves worked in the heart of the Dump for Tal'Thera – a derogatory term opposing Zombs reserved for Ytterbia.

Nevertheless, Ytterbia actually admired the Unliving for their endurance and togetherness. Most likely, she wanted to find an occupation for them, to educate them, to complexly raise their Unliving standards amidst the inhospitable world. However, her doctrines were later corrupted by her power-hungry sons, who tightened the screws on working conditions in colonies as time went on. Several revolts sprang up in X-Tal after Ytterbia's death. All were brutally surpressed.

The Lady of Excavation was poisoned by a hacked bot which acted upon orders from her youngest son Tal Turog, all despite catering to her needs for her entire previous life. Her breathtaking wealth, accumulated during decades of intensive excavation, was subsequently looted by other Tals and went down the drain during lingering wars with opposing Unliving states. As the only heir mentioned in the forged testament, Tal Turog outlived his mother by mere two Tols.