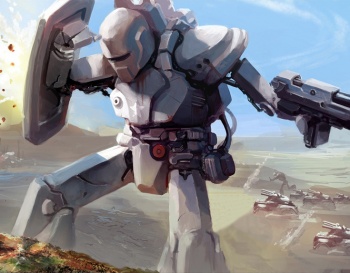 The long and bloody war of the Seven Holy Worlds led to the creation of conventional infantry divisions under direct command of Ibar Sigor and the neo-guard. Almost anyone could become a member of these units, so called yunanars - it was sufficient to submit an application to join the service. For Qu-Puans, service in the infantry units was primarily a matter of honor and a matter of moral obligation, at least to a certain extent. The ranks of yunanars grew every day by hundreds of volunteers. Their preparation and training lasted for a relatively short time, but due to the physical and psychical difficulty, many have died already on the training grounds. After successfully finishing the training, the recruits were immediately sent to war. Yunanars were deployed into the worst and most dangerous assignments directly in the first lines. The best of them were rewarded for their success in battle with reassignment to the neo-guard itself.

The most famous yunanar during the war of the Seven Holy Worlds was without a doubt Caj Qan, who has shown exceptional talent already on the training grounds. Thanks to great success in the battle of Xo-Puo, he attracted the attention of Ibar Sigor himself. He summoned him and offered him the post of Master Sergeant. Caj accepted the offer with enthusiasm and soon became a living example for all yunanars.

Ibar Sigor eventually joined the side of mograt-ekhro resistance, which was one of the reasons of the fall of Qu-Puo. As the war ended, the yunanar position ceased to exist. The most loyal of Sigor's neo-guard members followed him to the Lordly moon, where they became his personal army. The training, which was originally used for yananars, is still in use in the Southern Cloud to this day. It last for a longer period of time, however, and is less psychically difficult.