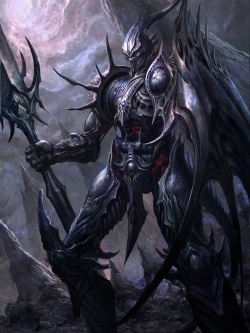 Iconical visualization of Zil in his ceremonial armor decorates the palace of lords in the Southern Cloud to this day. It is a truly unique piece of art, as the Searths themselves are forbidden from depicting living beings.
(Coraabia Artist: Wei)

The name of the military theorist and awarded tactician of searth origin is forever inscribed in many tractates dealing with the art of war. The secret Eikku movement (which later transformed into the Sol caste) took over his visions of discipline, which then defined in the so called Seven pillars. Zil's legacy is also present in the declaration log of the Liga. His teachings influenced many, but not always in the way Zil would have wanted. The warrior union Sooea Ttaebu has twisted his thoughts to such extent that Zil openly dissociated from them. Disgusted by his own race, Zil forever left Searth and left behind an unwanted legacy in the form of the union, which unreservedly admires him - and does not really care that the legendary Searth hated them.

Zil found shelter on the Palace of lords, where he took the position of military advisor of Ibar Sigor himself. Searth received much respect and trust from the Moon lord and slowly kept preparing the situation to reveale his ambitious plan - the overthrowing of the mad Emperor-Prophet. Ibar supported the invasion to Qu-Puo as if it was his own and together with Zil defined the result of the war of the Seven Holy Worlds.

The long-living Searth impacted the course of many famous battles, but his name was slowly fading into the dust of history, overshadowed by the rising star of the moon lords. Zil travelled through many other worlds of the Coraabian multiverse, but was often met with resistance and misunderstanding. His life ended in the moment, when Tauho, the mad dictator of Golgakk, ordered complete bombardment of his own capital city during the local civil war.