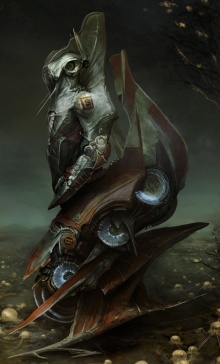 For the first few Tu of the occupation, there was only one serious competitor to the business efforts of Miners – an ancient Zomb controling all the corabit mines atop the gigantic deposits in the depths of the Great Corabit Well, situated to the south-west of the city-state Mino (later called Min'Ora). Zombog was probably the wealthiest Coraabian industrialist of his time and he indeed often flaunted the social status achieved. “The Eternal Og” had literally all the pseudo-forests in the southern hemisphere cut down to facilitate the progress of his mining operations, which brought extinction upon dozens of rare biotopes boasting creatures both living and unliving. The Miners hated the old Zomb, as the wealthy Mino was their only worthy enemy and a reason to stay alert. All Miner Lords were very interested in corabit, an expensive industrial resource of extraordinary qualities. However, as long as the mighty and influential Zombog clinged to his unlife, they did not see an ounce of it.

With the generous bribes he acquired from the Miner Lords, Zombog procured a unique, bespoke protective suit made by their engineers. It was perfectly resistant to all conventional weapons as well as radioactivity. Little did he know he had been betrayed as the suit could not be taken off once his wearer put it on. The Zomb survived in his suit for the next seventy Tu, during which he eventually became insane and finally ended his unlife by jumping into the Great Well.

In 3710 Tu, Zombog's suit was lifted up from the depths on the order of Valigursai, a powerful Min'Orian Zomb obsessed with exploring the origins of Zomb culture. Allegedly, he has been too scared to ever open this "sarcophagus" because of a worrisome feeling that the shrunk Zombog could be still alive. Therefore, the suit has been kept sealed in his private exposition the whole time.