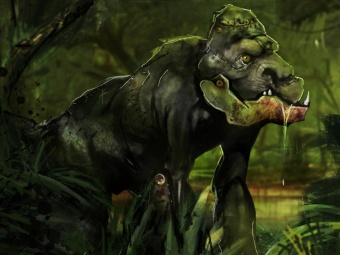 Despite his animal look, Zubei operated with a certain level of intelligence that allowed him to effectively communicate with the surrounding mass Xa.
(Coraabia Artist: Scrybe)

In the times of Hwarang's peaceful reign, a lower daemon called Zubei was born from the mass Xa. He acted like an animal at first, gobbling garbage and carcasses, rambling through the lands of Grannok and slowly learning to understand things around himself. Whenever he encountered other daemons, he always kept a proper distance from them, so great was his fear of his brothers. Despite all the caution, he got trapped once - encircled by a group of Meta Xins who were going to kill him without hesitations. Zubei panicked, used his mind to reach beneath the surface and summoned the powers of mother Xa to his aid. The matter appeared virtually from nowhere and smashed the attackers to all directions. It was the first time the daemon discovered his special powers. He never left the lands of its native matter again, feeling much too vulnerable without it under his feet.

Zubei also used the matter Xa while foraging. He used its power to unearth greasy collaxide worms, normally burrowed in deep dump holes where they were nearly impossible to catch. Zubei ate so many of them once that one of his digestive bladders blew up. Were it not for a parasitic lichen of Xeaktolodda genus that closed the wound immediatelly, the daemon would die on the spot.

Daemon Zubei met his death near a mining vortex Hazzk, which was illegally build by a mining corporation from the distant Fourth Miiwan Empire. A patrol of mercenary Sols localized Zubei thanks to a deep scan of the area and eliminated him with a single accurate shot of a large caliber yun-thorium projectile.